Welcome to the Church of the Ascension, the Anglican Church in Hilton. Officially called Parish of Kirby-Hilton, in Umngeni Archdeaconry, Diocese of Natal.

We have 2 in-person, Covid compliant Eucharist Services a week:

“a beacon of hope & a witness to the kingdom of God the Father, Jesus Christ the Son, and the Holy Spirit among us.”

Anglicans have been worshipping here in Hilton since 1904. A congregation started to worship in this church in 1907 when the faithfulness and foresight of Anglicans living in the village of Hilton Road led them to erect the historic church building. Built of Natal red brick, it was designed by the practice of Sir Herbert Baker, who is famous for the Union Buildings in Pretoria and Rhodes University in Grahamstown.

At the time, it was the only church in Hilton, built on a hill – a beacon visible for many miles around. Current generations of worshippers strive to emulate the faith and witness of their forebears in being a beacon of hope and a witness to the kingdom of God among us.

Recent Rectors included Vernon Lund in the 1970s and early 1980s, Ian Cowley into the mid-1990s, and Stuart Mennigke from then until 2002. He was followed by Nic Denny-Dimitriou, who began ministry at Church of the Ascension in June 2002. He remained for 11 and a half years until December 2013. Paul Mosdell became the next Rector from January 2014 – December 2020. The current acting rector is Nobuhle Hlatshwayo. 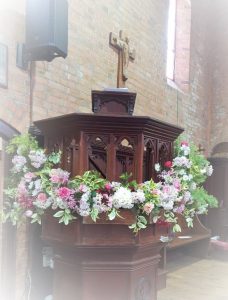 Copyright © 2021 Church of the Ascension